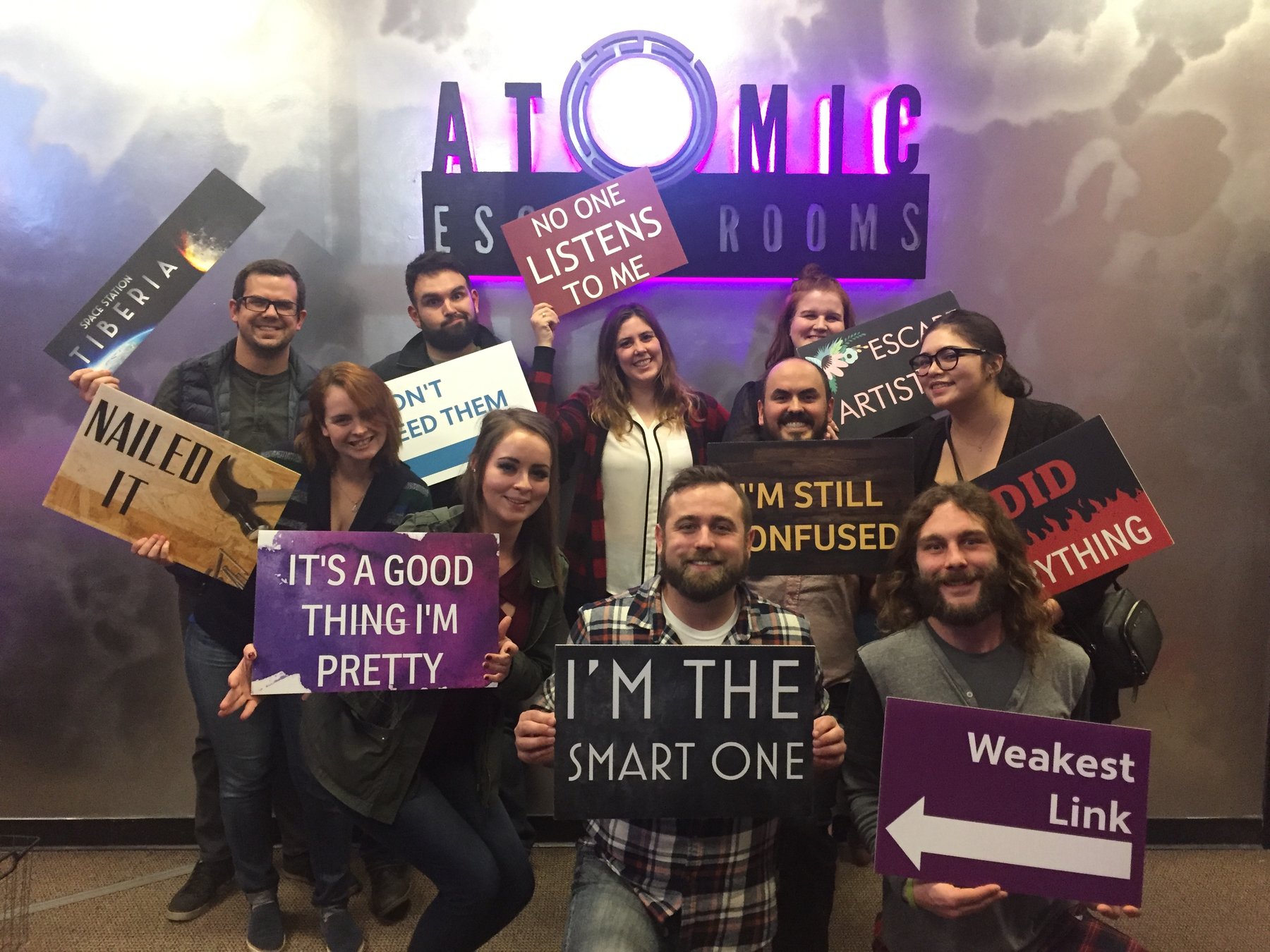 “We knew we wanted to open escape rooms," Julianne Wright of Atomic Escape Rooms says. "Doing the math, I said, we have to have three rooms running to pay the bills. If we can’t have three rooms up and running the day we open, it’s not gonna work.”

They didn't have three rooms up and running when they opened. Instead, they faced a business owner's nightmare: the opening date was set but they lost their construction crew over the summer. And everyone else was booked up.

Despite that? Years later, her escape room business is thriving. They've got a suite of live escape rooms connected by themes and characters evoking a gold mining community. So, how'd they do it?

It looks like an empty room. To you. But for the players, VR headsets take them to any one of many different VR escape room experiences!

"I always will tell them that it saved the day for us."

While looking for a way to ensure a successful launch, Atomic Escape Rooms found vrCAVE — just as we, too, were getting started. This was early days for commercial, modern virtual reality, and vrCAVE was looking to partner with forward-thinking location-based entertainment business owners to bring our VR haunted house, Hospital of Horror, and our first VR escape rooms, Space Station Tiberia and Depths of Osiris to a public audience.

The big upfront advantage to VR that made success possible for Atomic was the ease of installation. Nothing's quite like walking into a meticulously prepared physical escape room filled with authentic props, satisfying locks, and convincing themes. But it all takes time, resources, and passionate expertise to get everything just right.

In terms of the physical presence? VR escape rooms pretty much need the opposite: empty space.

So, Atomic Escape Rooms made a decision that let them open on time with attractions that brought in paying customers. They opened with vrCAVE's VR escape rooms as the draw.

What does this VR system mean for a business like an escape room? Thanks to our pioneering use of backpack PCs to power the VR headsets available at the time, Atomic was able to offer their customers all the freedom of a traditional escape room experience — with the flexibility of virtual reality. Most importantly, while construction continued on the live rooms, the VR rooms enabled them to satisfy key escape room customer needs:

Rooms are filled with intricate puzzles and problems to solve — many of which require collaboration. They take people places they could never dream of going in real life and that live escape rooms would have a hard time convincingly creating. And they deliver a VR experience unlike anything most customers have ever done before.

Now? Atomic runs three live escape rooms, and has three rooms available to run VR experiences for up to five people in each. Each VR room can run any of now 5 VR escape rooms, plus Hospital of Horror, plus the action puzzle game Laserbots.

Unlike stationary VR options, the vrCAVE system allows people to freely walk around a physical space without the inconvenience — and liability! — of wires trailing behind them. This allows for a larger, totally safe play space that really shows off the strengths of VR. The system delivers an outstanding time for the customer rather than the sometimes underwhelming experience of sitting in one place as the game happens around them.

It also eliminates the problem of VR motion sickness. Stationary VR experiences that let the player move through the virtual world can leave the user feeling nauseous — not a great look for an entertainment business. But when you're able to completely sync the VR world with real-world motion, that issue vanishes.

Perhaps most crucially for businesses like Atomic, vrCAVE's system allows for groups of up to five people all in the same space, tracked correctly. People can see each other, talk to each other, and walk around the same space together. And it's so easy to pick up that Atomic sees customers of many different demographics.

With those three rooms, they have the capacity for larger corporate bookings, too. And there's nothing like a large group split into many teams to get the competitiveness going. They'll go all-in on the rooms in pursuit of the shortest time it takes to finish.

In fact, with multiple rooms in which to operate the VR, two groups can race against each other on the same room in real-time. That's something that's just not possible when you've only got one version of each of your live rooms. With VR, a business owner has a lot of flexibility. 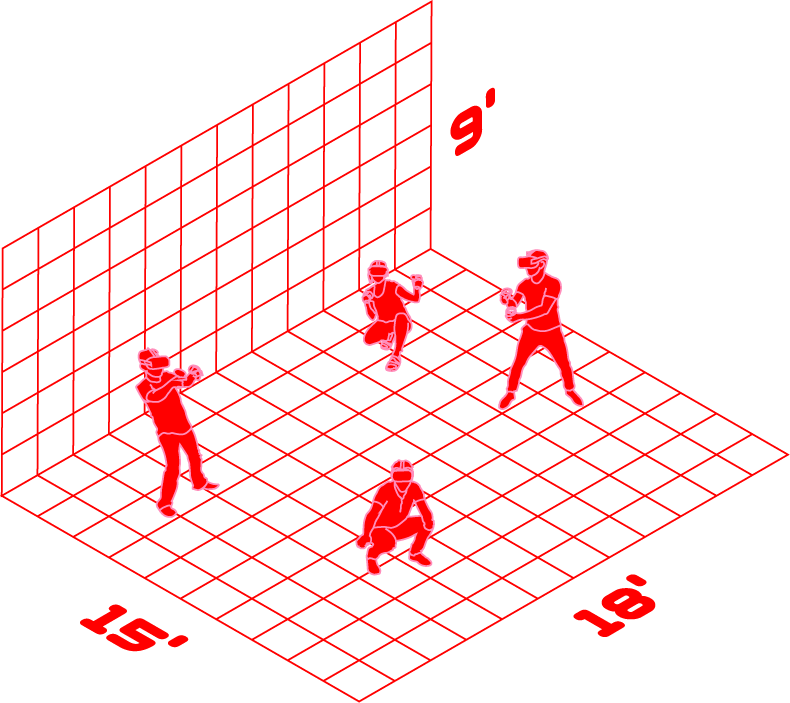 The vrCAVE system just requires an empty room to host VR experiences for groups of multiple people at a time. With multiple rooms, different groups can play different games — or the same one simultaneously!

"They are like, addicted when they come out. After one time."

THE ADVANTAGES OF VR FOR ESCAPE ROOMS

Atomic Escape Rooms found that VR experiences were great for customers. So, how are they for the business owner?

Despite opening up with just the VR rooms, Atomic doesn't see the VR escape rooms in opposition to their live rooms — nor should they! But the reality of live escape rooms is ultimately that each experience is an exclusive use of that space. And a customer is only going to do any given escape room once.

“I can take one space, one 15 x 20 space, and I can put five different escape rooms in there," Wright says. "How often do you have an interchangeable escape room where the same group can come back to that same square footage over and over again?”

Space dedicated to VR is space that can be enjoyed as many time as there are new VR games — and Atomic customers do come back for more. They'll run through all the VR games available. Then they're back again anytime a new game is added to the library. Just this year, they started running the latest release, Manor of Escape, and yes, people are clamouring to do "the scary one."

The kind of VR that lets users just walk around and really feel like they in another world? It's still not very common. There's huge opportunity for any business with the space to be the first in their area to make it available — and that's been true for Atomic. Locals just don't have access to this kind of experience elsewhere.

It makes them stand out.

People either see the VR while they're there for a live escape room, or they come specifically for the VR. They try a game, and they're hooked.

“People will come out of the VR rooms, they’ll say ‘that was so fun, when can I sign up for another one?'' Wright says. "They are like, addicted when they come out. After one time. They’re saying ‘I was blown away’.”

What's next? Well, they come back. Because nowhere else will so immersively send them and their friends deep beneath the ocean, high above the Earth, or travelling through time. That makes your business special.

Easy to Train For and Operate

Worried that it's too high tech for you and your staff? One of the great things about vrCAVE's approach is we support equipment that's easily available and designed to be simple to set up. We didn't send Atomic a custom hardware solution that only we know how to use and service. We got them going with HTC Vive headsets and Zotac backpack PCs and all the support they needed to get the software running on them.

Once set up, Atomic was able to train its staff on running the games. And as they're designed for a business hosting fun group activities, the staff are empowered to step in if they need to, with operation controls that can give extra hints, move groups forward if absolutely required, and give previews of the other games if they finish with a little extra time.

Today, Atomic Escape Rooms is a thriving escape room business welcoming customers to challenge a host of escape rooms — both live and VR — every day. And customers come back over and over to tackle them all.

But it all started with that empty space and trust in the VR to get people through the door while they got the business ramped up.

“When I talk to other owners about VR," Wright says, "I always will tell them that it saved the day for us.”

Get Set Up With VR In Your Business!

Whether you're opening a brand new escape room business, or are thinking about adding VR to an existing business, if you're ready to see that same success find out more about how to become a vrCAVE partner here! 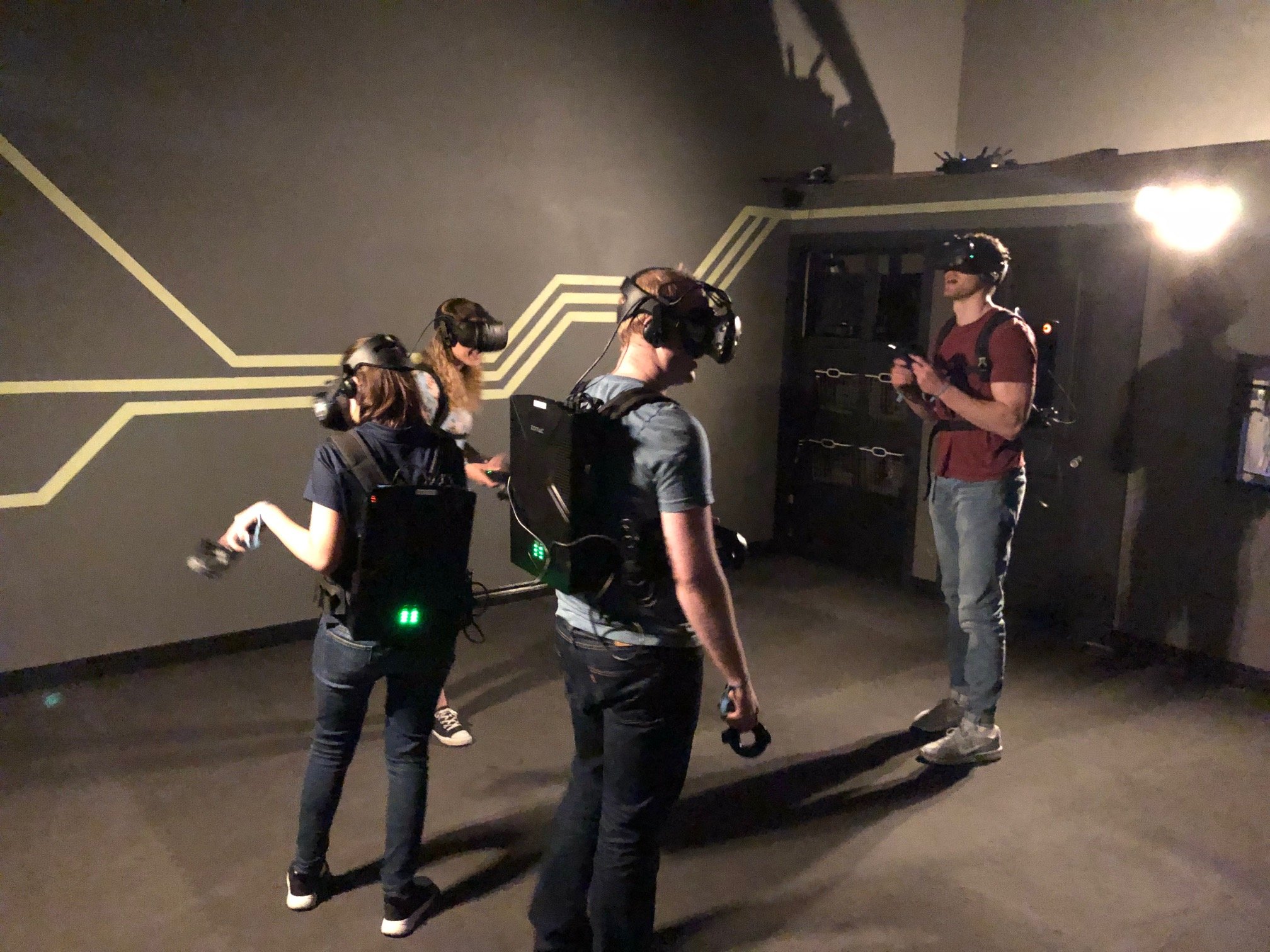